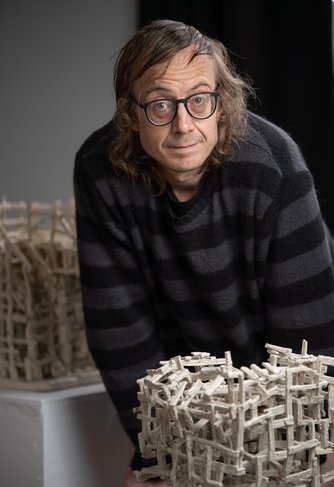 Far Out Into the Galaxy…

Since graduating from the Royal Danish Academy of Fine Arts in 2001, Jesper Dalgaard (b. 1974) has made his mark as a distinctly original voice in Danish contemporary art. In categorizing him, ‘sculptor’ is the label most readily applied, but it needs to be understood in the broadest sense. For Jesper Dalgaard creates hanging sculptures that are composed of sticks, fibre grass, polystyrene and the kind of materials retailed by model-making shops. In common with others of his generation, he has pushed the boundaries of the medium, radically challenging the conventional parameters of sculpture. An early exhibition in 2005 at Galleri Christina Wilson was tellingly entitled But Today Everything Is Possible.

Besides producing sculptures and sculptural installations, Jesper Dalgaard draws, paints and makes videos. His entire output can be seen as the unified and coherent orchestration of an ambitiously-conceived, wood-crafted, sci-fi universe in model scale: a floating, futuristic, intergalactic town composed of mysterious-looking globes, where elements recur intermittently throughout the oeuvre. It is a universe whose foundations were laid during the artist’s time at the Academy. In the years that have followed, he has worked on it further, enlarging and expanding it. We can regard his work – indeed he does so himself – as the depiction of a fictional community or an ideal utopian society projected into some future time. As their titles indicate, several of his sculptures are scenarios ‘played out’ 2-300 years hence.

It all began with the creation of fertile utopian planets, featuring little woodpiles, conifers, plastic flowers (and now and again a tiny plastic pig), scattered about. Thus, for example, a two-and-a-half metre long, grass green globe, constructed in 2001, was dubbed “It hardly bears thinking about, but if we go just two years back in time, precisely the same thing occurred that has led to the present situation. Mort Fega, 24 March 2290.” No background explanation is given, no set of correct answers on offer, but the title is piquant and open-ended enough for the viewer to weave some suitable sci-fi film scenario, envisaging how the ‘storyline’ might unspool.

Having concentrated on hanging globes for a number of years, in around 2005 Jesper Dalgaard began to build small models of interiors that would constitute the imagined homes of the undifferentiated, anonymized stick figures that populate his drawings. These dwellings are characterized by a blend of the stylish modernism and utopian design that typically featured in sci-fi films of the 60s and 70s: white-tiled walls, clean lines, generous windows with rounded corners, illuminated touch switches, stiff, white, futuristic sofas and swish wallpaper featuring geometric Op Art style patterns in orange and turquoise. A title from as early as 2001 reflects Dalgaard’s dual fascination with modernism: “We have just reprinted a vintage wallpaper collection that I myself designed back then, and I have to admit to having been deeply inspired by the so-called modernist era.”

On the walls of the exhibition at Kunsthal Nord, Dalgaard had hung diminutive abstract paintings – again, executed in a homely, naïve idiom – that embody popular conceptions of ‘contemporary art’. Indeed, in general, Dalgaard’s works tend to incorporate a reflection on art’s decorative function in everyday life. The stick figures are indistinguishable and all move in the same robotic way, but in a video entitled “All the Way Round and Back Again”, one of them is cast as a dollar-sign-eyed, successful artist. Creating design-influenced art, he makes a fortune. And although out and about, joining his in-crowd friends for private viewing events at hip bars, the drinks flowing freely, he ultimately ends up depressed, sad and lonely.

Dalgaard’s universe, while conceived as a futuristic utopia, is reminiscent of the late sixties (and to go back even further – of Fritz Lang’s 1927 Metropolis). And by the same token, it also reflects the streamlined interiors of the present day, as featured in every issue of House and Garden. One of these small peep show view interiors at a 1:10 scale is entitled “The view is fantastic! My home’s hooked up to one of the biggest oxygen capsules and I have the most terrific natural scenery outside my windows. I do so enjoy watching all the spacecraft transporting the workers to and from the modules. And then there’s the wildlife – something quite on its own.” Here the viewer is presented with a living room, the content of whose panoramic window view is a video showing the planet sculptures floating by in their imagined galaxy.

The exhibition in Kunsthal Nord – his largest to date – marked a major step forward for Jesper Dalgaard and his highly distinctive sculptural world in that two of the pieces that had already been realized as models were scaled up to full size. The peep show view interior, complete with panoramic vista (mentioned above) was the first space that the exhibition visitor stepped into, now realized at a 1:1 scale. One touch on the touch screen and the ‘lift door’ slid up. The visitor passed into a large white space and from its panorama window could gaze out on a (turbocharged) day in the Dalgaardian galaxy, the planets dancing with dream-like serenity across the end wall. In a middle section – a sort of corridor between two exhibition sections – Dalgaard had constructed a huge installation of spruce stems that visitors were obliged to climb up into and around in order to proceed further through the show. And by so doing, found themselves morphing into the stick figures featured in the drawings, experiencing the sci-fi universe at first hand – transformed into generic, modernity-loving, dystopian figures performing in the Dalgaardian world.

A distinct strand of social criticism runs through this universe, targeting the degradation of the environment, capitalism’s homogenization of both individuals and the wider world, while at the same time giving form to our desire to start afresh and realize our unfulfilled dreams. Along the way, Dalgaard also has a pop at the decorative function of art and art’s commodification. And yet at the same time, the whole remains sufficiently enigmatic and ambiguous – features reinforced by the titles’ narrative slant – to capture the viewer’s imagination and send it wandering far out into the galaxy.